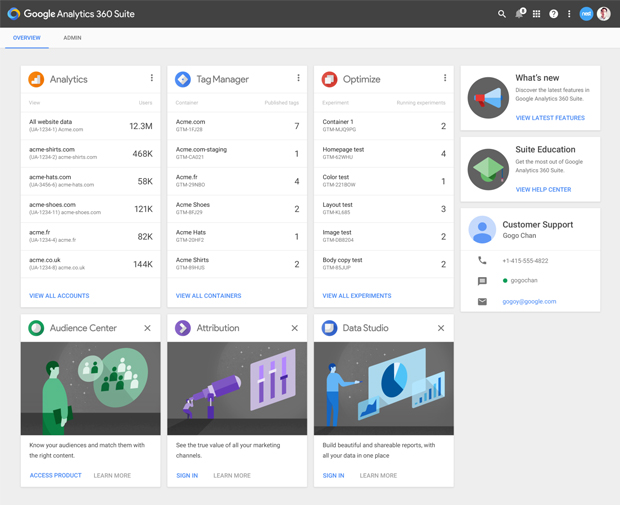 The various tools that make up the suite are independent yet interconnected, devised to be integrated even with third-party tools. Some of these were already available as a service by Google, while others are newly introduced.

Google Analytics Premium has been replaced by Google Analytics 360. The tool provides raw data, both from the site and from third parties, related to online and offline experiences. The advantage is that you can perform ad hoc analyses, select the data you need, and make decisions accordingly.

The platform for managing and organizing all information coming from the target audience is Google Audience Center 360. This tool allows for a better understanding of customer’s behavior and for the discovery of new, very similar, ones. It exploits all data coming from AdWords and DoubleClick, with which they are integrated natively, as well as from integrated third-party platforms. Through this tool it will also be possible to recognize omnichannel shoppers, and to create targeted campaigns for them.

Google Optimize 360, on the other hand, has been designed to provide digital marketers with the opportunity to improve the usability of a site, from various devices, through testing and customization.

Google Tag Manager has given rise to the new Tag Manager 360, which allows for the rapid management and control of tags, while Adometry was acquired by Google who perfected it and renamed it Google Attribution 360, a tool that allows for cross data coming from various platforms and output optimization ideas for marketing activities, online and offline.

One of the most important innovations introduced by Google Analytics 360 Suite is Google Data Studio 360, an advanced tool for reporting and visualizing data. Marketers will finally be able to create graphically appealing and complete reports and dashboards.
In addition to facilitating work for web marketers, Google Analytics 360 Suite is designed to provide users with a personalized and engaging online experience.
A great job by Big G, who understood the imminent need to review the old Google Analytics Premium project from scratch, integrating it with all the features and platforms that are emerging in support of marketers, but that until yesterday were not available in a single solution.
We are thus nearing a future where all companies will be able to customize media according to their user behaviour.

Enjoy the introductory video by Google:

Stay up to date!

Subscribe our newsletter to receive all the Eurostep News directly in your mailbox!

Did you enjoy our article?